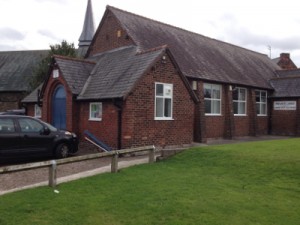 The Church Hall has been a part of St Stephens Church since it was built over 100 years ago.

The Church took back control of the hall in September 2011, following a period of 35 years of being managed by the village community group (MADCA). They were responsible especially in the early years for bringing the hall back into an habitable space.

Since taking it back the management team appointed by The Church PCC have started the process of investing and improving the hall using in the main the surplus income attained after all everyday expenses have been covered. The first year saw the installation of accessible toilets (helped by a £5000 grant by MADCA which they had promised on switchover)

In the second year we put in replacement windows and some new doors. The church highly recommends the installers for the high quality of their workmanship:-

Our 3rd project was to see whether we could convert the small room off of the hall into a more inviting space. This was accomplished by a team of churchgoers who firstly stripped the old wallpaper off, replaced old fashioned tiles with new skirting boards and then re decorated and painted and had a new carpet fitted. We renamed it “The Green Room” after the colour scheme we used.

The 4th project was to make the back room which is Moulton Pre Schools home into a more child friendly area. Initially creating more enclosed outside space, we then turned to the inside to create a “young peoples” bathroom along with modernising the kitchen. This was part funded by CWACC & Pre School.

The next on the list for attention was to replace the boiler. This will be of great benefit to all users and will also help us to keep the gas bill down. The new one was installed in August 2015

In the same month, we started to get to grips with painting the rather dated colour scheme which existed in the hall. On completion the whole hall will have a more lighter & cleaner feel to it. We also managed to paint the kitchen area in yellow!! This will be ongoing until completed.

(i) To convert the old balcony which had become a bit of a dumping ground. This was acheived by boarding it up (David Wakefield Maintenance) including double glazed windows (again I.D.)

(ii) To extend the Pre Schools outside area to right across the top of the grassed area. This was in readiness for another building extension of which planning permission was granted. This unfortunatly had to be put on hold in 2017 (but is now under a serious re-think with plans for the project to go ahead by 2023) but it was decided to still go ahead with landscaping and kitting out of the play area. This area was completed in readiness for start of term in September 2018

The hall continues to be run for the benefit of the whole of Moulton and is available to be booked for village and community events with the proviso that it is respectful of our Christian Faith.

Many village groups use St Stephens Church Hall as their base and these can be found on the “user group” page.

Comments are closed, but trackbacks and pingbacks are open.